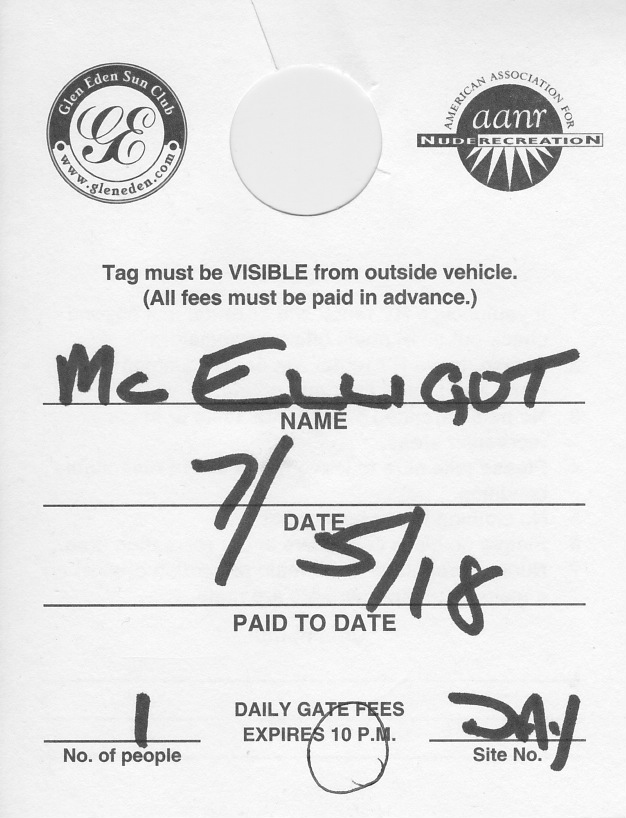 A few days ago, I regaled you with an account of my first experience going nude on a clothing-optional beach. Today, I stuck another toe into the world of social nudism, taking the free first-timer’s tour of the Glen Eden Sun Club, a nudist resort just a little north of Lake Elsinore, CA. While Glen Eden may lack some of the natural splendor of the La Jolla cliffs over Black’s Beach, the local scenery is lovely in its own right. It is certainly easier to reach, being much closer to where I live and lacking the death-defying climb to reach the bottom.

You must call ahead and make an appointment for the first-timer’s tour. Glen Eden, like any other family-oriented nudist resorts, has a system to keep the riff-raff out. When you arrive, they take a copy of your driver’s license and run a background check on you. Before they will let you in, they want to make sure that you don’t show up on any sex offender databases and haven’t been thrown out of any other nudist clubs for being a creep.

After doing all the paper work (and putting little stickers over both cameras on my phone, per the rules), I waited for Steve, the club member giving me the tour. He’s a big, burly guy and, not unexpectedly, was nude except for a baseball cap when he introduced himself. Glen Eden requires that every first-time visitor take the tour in the nude. I’m sure this simple fact does a lot to discourage looky-loos.

Back in my car, I followed Steve’s golf cart (the favorite form of transportation at Glen Eden) until we reached the main parking lot next to the pool area. Standing next to my car, I took off all my clothes. I think the last time I was nude in a parking lot, I was ten years old and had to change out of my wet clothes after falling into the sturgeon pond at the Bonneville Dam Fish Hatchery. That is another story, of course, but at least this time it was my choice.

Throwing my towel over the passenger seat of the golf cart (something you have to do for everything you sit your bare buttocks on), I climbed in and off we went. I suppose some people might find it awkward to be naked in such close quarters with an equally naked stranger, but in a place like Glen Eden, you stop noticing things like that very quickly.

Steve drove me around the complex, showing me the features and amenities. The heart of Glen Eden is the recreation center, featuring multiple pools, a hot tub, tennis courts, a billiard hall, a café, and courts for something called “Pickle Ball,” a tennis/ping-pong hybrid.

Glen Eden has both permanent residents and guests, who can either bring their RV, camp out in tents, or stay in a handful of small but comfortable rental units. Tent campers and guests in the three smallest rentals share communal bathroom and shower facilities.

As you ride naked shotgun in a golf cart, you may notice that not all the people around you are nude. The entire facility is clothing optional except for the recreation areas, where nudity is mandatory. There are also employees and construction workers around, doing their jobs, as well as guests and residents who just happen not to be nude at that moment. Much like on Black’s Beach, however, you quickly understand that the clothed people around you are thoroughly blasé about the sight of people walking (or riding) around in the nude, probably even more so. Some innocent folks arrive at Black’s Beach unaware of its clothing optional status until it’s right in front of them, so it comes as a shock. You’d have to be incredibly thick to be surprised by nudity at Glen Eden.

The tour lasts about fifteen minutes, and after that, you are effectively just another guest at the resort until 10pm. After Steve left me to my own devices, I headed straight to the pool. This being a weekday (although the weekday right after a major holiday) the resort was quiet. There were never more than ten people in the pool area at any given time.

I took about a half-hour to get some sun. My preparation for the day had included very carefully and liberally applying sunscreen over my entire body before I left, lest my alabaster Irish skin get lobster-ized.  Lying out there in the ninety-plus desert heat, parts of my body that weren’t used to sunlight now exposed to a lot of it, I was never happier to own an Apple watch. It was easy to set a timer to give myself a gentle reminder to flip over, and then again when my back was done.

After sunbathing, I reached the part of the day I had been looking forward to since I made the appointment for the tour: plunging nude into the cool water of Glen Eden’s very well-maintained outdoor pool. I probably can’t effectively communicate why, but to freely and openly skinny dip in a semi-public pool was worth the trip by itself in my opinion.

Most of my experience with skinny dipping, except for the hot tub at a Halloween party a few years ago, was in my teens and twenties, when I would watch my parents’ home while they were away. I would take advantage of having the house to myself by not only being nude as much as possible, but also taking a moonlight dip in the pool. That was as much about getting away with something as simply enjoying the feeling of gliding through the water without swim trunks, although that was very nice, too.

This time, it wasn’t just the uniform feeling of cool water over my entire body, but also the peace of mind that went with doing something that was commonplace to the people around me, even the family with the three small children.

Glen Eden is a family facility, so there will be children around and, yes, they will be as naked as you are when you are in the pool. Because of the care that the management takes screening their guests, I suspect those children are safer at this place than almost anywhere else.

Like any place with shared or public pools, Glen Eden requires you to take a soap shower before entering the pool. This being a nudist resort, not only are the showers coed, but they are not enclosed. One entire wall of the shower room is completely open to the outside world. The other person in the showers with me, a woman who looked to be in her eighties, seemed unconcerned to be showering with a fifty-ish male stranger.

After my swim, I put my flip-flops back on (and only my flip-flops of course) and went off to explore parts of Glen Eden on my own, walking the campgrounds and guest areas.

It’s not easy to describe to someone who hasn’t experienced this freedom just how good it feels to walk completely nude down a street in broad daylight. You may know that you’re on private property where being nude is allowed when it’s not required, but a street is still a street. You’re still walking naked along a road past people’s homes and no one is calling the cops.

I was continually aware of my own nudity during my walk, but blissfully free of any self-consciousness about it. If you’ve been nude where it isn’t 100% allowed, such as discreetly sunbathing on clothed beach, there is always that tension, that alertness, the readiness to cover yourself at any moment, that somewhat spoils the experience. It’s so much more relaxing to go without clothes in a place where that is either accepted or expected.

It isn’t just the freedom to enjoy the air and the sun on usually private parts of the body. Clothing has a certain weight to it. It confines us while it hides and protects us. We’re so used to it that we barely notice when it’s there, but you really notice the lack of that feeling when you are out and about in broad daylight wearing just your skin. Nude recreation means that you are truly leaving behind everything connected to your workaday life, including the mundane sensation of wearing clothing. I would highly recommend trying it, so long as you are at a place like Glen Eden or Black’s Beach when you go for your first nude stroll.

This experience has certainly whet my appetite for trying either a nude hike or camping trip and being out of civilization in the most natural way possible.

I am also seriously thinking about buying a membership at Glen Eden. There are a couple of other nudist resorts in Southern California that I would like to sample before giving my money to one, but Glen Eden has set a high bar for them to meet.

2 Replies to “My First Trip to a Nudist Resort”