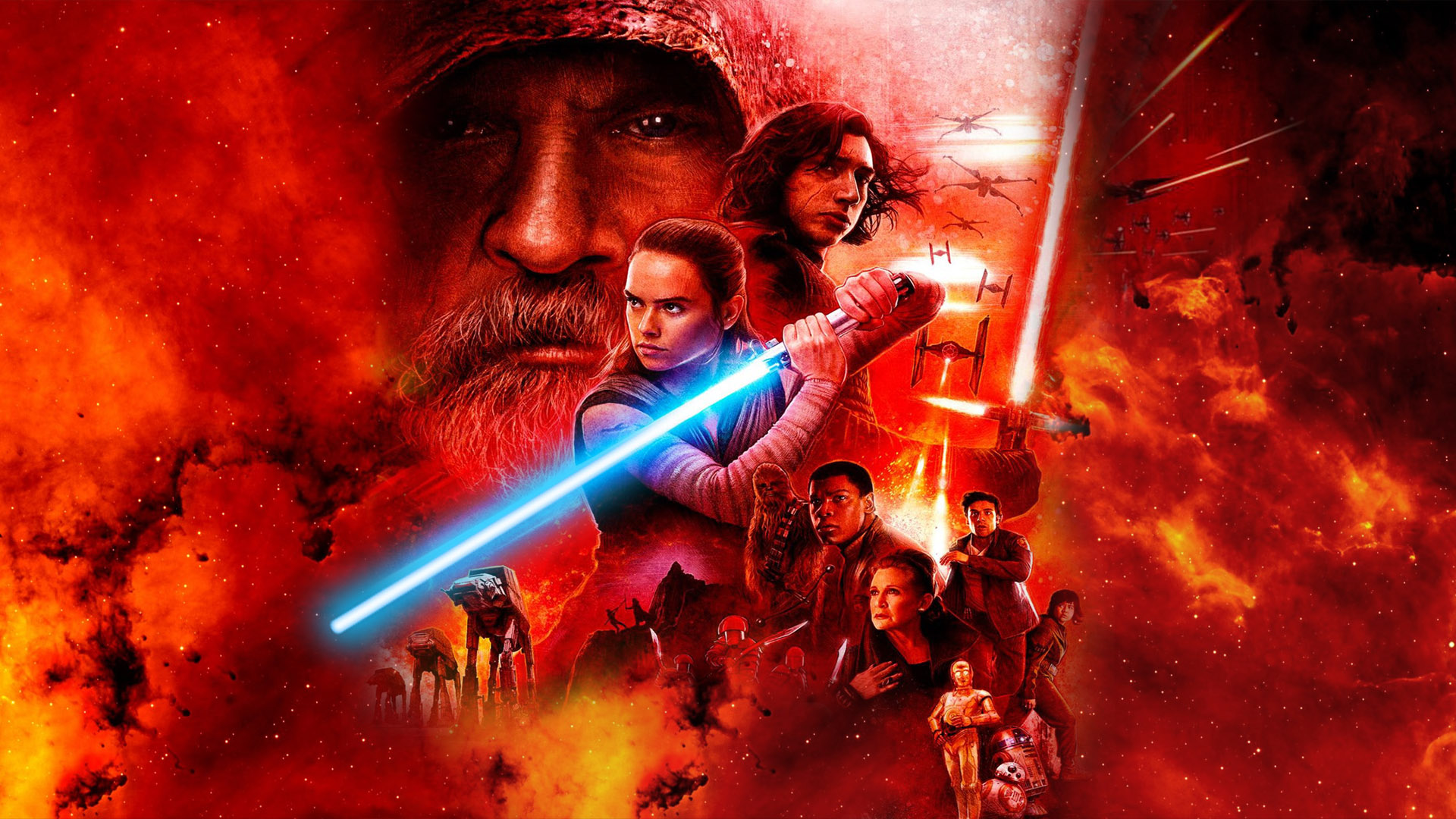 To believe a disproportionately vocal minority of Star Wars fans, Episode VIII, The Last Jedi was such an affront to all that was good and special about Star Wars, that it was like writer-director Rian Johnson dropped his trousers and took a wet steaming dump all over the franchise.

What their reaction to The Last Jedi did was tell me that I was not, as I previously believed, a hardcore Star Wars fan. I am still a huge fan of the franchise. After all, I saw the original film twelve times in theaters on its first run from 1977 through ’78. I’ve collected the films on virtually every home video format there ever was (excepting Betamax and CED video discs). Back in the 1990s, I spent more than $200 on a Laserdisc box set of the original trilogy. I still have it, even though my Laserdisc player has long since gone to the consumer electronics version of Valhalla.

So, no one can question my bona fides as a Star Wars fan, but I am not a hardcore fan. I don’t collect every comic book and novel. I’ve read only the tiniest fraction of the old Extended Universe/Legends books (and I’m not doing much better with the New Canon material). I am, of course, conversant enough to know the difference between Legends and New Canon.

And, to be blunt, I am happy not to associate myself with the petulant, entitled crybabies who call themselves “true” Star Wars fans today.

To be clear, I am not addressing my comments to those who simply didn’t like The Last Jedi as a movie. Everyone is entitled to their own tastes. People who simply didn’t like the movie, however, have long since gotten on with their lives. They are not, to this day, posting breathlessly conspiratorial YouTube videos  about how Disney and The Last Jedi have destroyed Star Wars for all time while stopping just short of accusing Rian Johnson of crimes against humanity.

And even though I personally liked The Last Jedi very much, I will concede that it has its share of flaws. The Canto Bight storyline wasted two charismatic characters on a subplot that feel desultory at best. Benicio Del Toro’s character is a waste of a great actor. For the second movie in a row, Gwendolyn Christie’s Captain Phasma is treated as an afterthought, little more than a cool costume and wasted potential.

But those flaws merely render one story line less enjoyable than the rest. The bulk of the film, and its two dominant story lines, is solid, both as a movie and as a Star Wars movie.

The Petulant Fanboys appear to have three arguments to back up their claims that The Last Jedi is “worse than the prequels,” and all three are wanting for both logic and substance. Be forewarned. Spoilers for Star Wars: The Last Jedi abound from this point forward.

During the two years following the release of Star Wars: The Force Awakens into theaters, Star Wars fans have spent untold energy breathlessly speculating about how the holographic baddie, Supreme Leader Snoke (Andy Serkis), tied into the existing Star Wars mythos, even though the character appeared in only three scenes of Episode VII and it was clear that the main villain was Adam Driver’s Kylo Ren. When in The Last Jedi it turned out that Snoke was just a stepping stone for Kylo Ren’s rise to power, the Petulant Fanboys lost their shit.

“We spent the last two years of our life, further foreswearing our chances of experiencing sexual intercourse while we speculated about Snoke’s origins. They have to be important!”

Like I said, Snoke was a relatively minor character in The Force Awakens and nothing, literally nothing, in that film suggested that his origins were in any way important to the overall story. They could have been, but nothing promised that they had to be. No one held a gun to the heads of Petulant Fanboys and forced them to waste their time dwelling on this.

They did this to themselves. The Last Jedi is not to blame.

First a matter of narrative bookkeeping. The Petulant Fanboys are currently holding out hope that we’ll learn in Episode IX that Kylo Ren was lying to Rey (Daisy Ridley) when he told her that her parents were nobodies.

Except, he didn’t tell her that. It was Rey who revealed her parents’ insignificance and Kylo Ren only filled in the details of their “nobody-ness.” Seriously, go back and watch the film again. Pay attention this time. It’s their inability to grasp these simple details that gives the whining of the Petulant Fanboys no credibility in my eyes.

If anything, the two wasted years spent obsessing over Rey’s ancestry are even sadder, even more pathetic than the efforts wasted on Snoke’s origins. We weren’t explicitly told in The Force Awakens that Snoke’s backstory was unimportant. We were told, quite clearly, that Rey’s family were insignificant to her story. Maz Kanata (Lupita N’Yongo) tells her “they’re never coming back.” The logical, plain text reading of this line is that Rey’s parents are unimportant to the story going forward, and in that light, The Last Jedi’s treatment of Rey’s parents is completely consistent with the earlier film. Even with this information in hand, some people still spent two useless years obsessively debating whether or not she might be a Skywalker, a Kenobi, a Palpatine, or Darth Vader’s clone. Yes, those were all theories people tossed around.

One Petulant Fanboy, desperately clinging to whatever pet theory he had, tried to argue with me that “Obi-Wan Kenobi isn’t coming back, and he’s an important character,” so Rey’s parents could still be someone significant. Right?

Wrong. Obi-Wan was important because he was a major onscreen character in four of the first six movies (and makes an appearance in the other two). Rey’s parents were dismissed as irrelevant without even being given a name. They are, and will remain, nobody.

At the moment, the Petulant Fanboys are making a lot of noise about how Rian Johnson scrapped J.J. Abrams’ original plans for Rey’s parents, which is fueling their forlorn hope that Abrams will somehow retcon her parentage in Episode IX. Given how that information was doled out, if you were paying attention, that is highly unlikely. Plus, it would feel like a cheat and I would lose a lot of respect for J.J. if he pulled something like that.

Also, whatever backstory J.J. Abrams had for Rey ceased to be relevant the very moment Rian Johnson took over for The Last Jedi and J.J. took no action in his role as Executive Producer to impose his version of Rey’s backstory on the next film. If J.J.’s version of events had been that important to the overall trilogy, he and/or Kathleen Kennedy would have stepped in and Rian, as a professional filmmaker, would have adjusted his story to fit the studio’s requirements. The fact that this did not happen is conclusive proof in my opinion that Abrams will pick up the story where Johnson left off and not try to retrofit Episode IX to his previous ideas.

I partially blame both the Snoke and Rey matters on the effects of the old Extended Universe material on fandom. A significant portion of Star Wars fans, too young to have seen the originals in theaters yet too old to be children when the prequels hit theaters, cut their fan teeth on these novels, which often delved deep into now-unofficial character backstories. You can always tell which fans these are. They like to speak of characters like Darth Revan as if they are somehow as important to Star Wars lore as Luke Skywalker and Darth Vader. These fans were conditioned to expect that the new characters in the movies would come with elaborate backstories that tie into the backstories of other characters. But that’s never how the movies have worked. They serve as self-contained stories geared for the mass audience. Most people can handle this, but Petulant Fanboys get very butthurt when Star Wars caters to the mass audience and not them.

Perhaps the loudest, and least rational, outcry from the Petulant Fanboys concerns the story arc of Luke Skywalker (Mark Hamill) in The Last Jedi. If I understand their objections, Rian Johnson’s greatest crime was not reading their collective minds and adapting everyone’s Luke Skywalker fan fiction to the big screen. Nor did he re-enact all the scenes we played out with our action figures in the backyard. Instead, Rian committed the unpardonable sin of treating Luke like a character in a story, his story, and giving him an actual character arc.

The specific objection, as I understand, is that after Luke Skywalker saw his star pupil go over to the Dark Side of the Force, the galactic hero abandoned his friends to run away and sulk. Doesn’t Johnson know that Luke Skywalker is just supposed to light up his green lightsaber and spend two hours kicking ass and taking names? How did he not know that was the movie he was supposed to make?

It’s a good thing a real storyteller like Rian Johnson was making this movie and not a bunch of Petulant Fanboys.

If the star pupil had been just any John Q. Force-User, the fanboys might have a point. Kylo Ren was his nephew, however, the only child of his sister and his best friend. As a teacher and a man, Luke felt like he had failed on so many levels that it was bound to mess with his head, which made the redemption story he got to play out in The Last Jedi far more interesting than the fan fiction that the Petulant Fanboys seem to be demanding.

It’s hilarious, really. The fanboys have objected for two years that The Force Awakens was nothing more than derivative fan service, a note-for-note remake of Episode IV (which it wasn’t). Now, with their snotty, bitchy, immature, entitled reaction to The Last Jedi, they’ve shown that all they really want, and all they really deserve, is fan service.

It’s probably best that LucasFilm understands that Star Wars films have to please a mass audience first, because at this stage of the game, trying to please the Petulant Fanboys is a lost cause.

One Reply to “Attack of the Petulant Toxic Fanboys”

My earnestly liberal friends, in their very justified desire for some movement on even the most modest gun safety laws,...